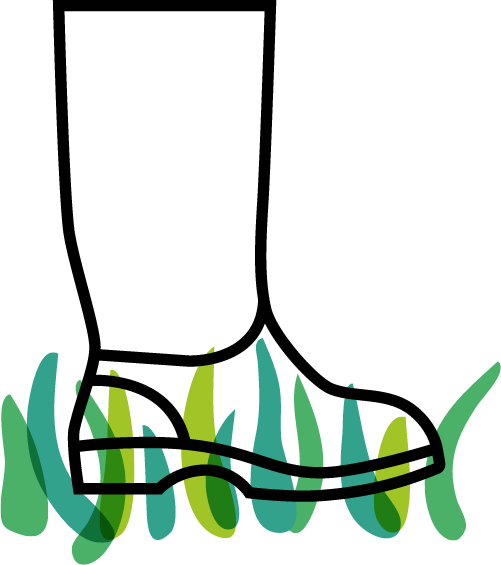 Dominique is passionate about sustainable agriculture. Frédéric chose to pursue a career in the environment. Together, they converted corn fields into permanent pastures on which they raise cattle, in harmony with their ecological values. They see their farm as a perfect environment to raise their three children. Always aiming to improve, it is in their fields that they use their scientific knowledge to create a productive and balanced agro-ecosystem.

Freshly graduated from McGill University in agriculture and the environment, Frédéric and Dominique settled in Pont-Rouge in 2006 with the intention of converting what was then corn fields into an ecological farm. From the beginning, a meadow is established on a quarter of the cultivable surface. The first calves stepped on the pastures in 2008. From 5 animals initially, the herd gradually increased to 15 animals in 2017, still on the same 19 acres of pasture. Along these 10 years of raising cattle, Dominique developed a strong passion for working in symbiosis with her herd and Frederic realized the positive impacts this operation has on the soils and the environment of the farm. In 2017, the couple decided to establish meadows and pastures on the rest of the cultivable land which had previously been rented out to a neighbor for growing corn. With these new pastures, the herd was composed of 25 heads in 2018 and it is with great enthusiasm that more animals will be welcomed in 2019 !

To offer your family an annual source of healthy and tasty meat, with the utmost respect for animals and the environment.

Permanent pastures capture carbon and thus contribute directly to the fight against climate change. In addition, the use of our rotational grazing techniques as a way to raise cattle significantly reduces the need to burn fossil fuel as the use of tractors is limited to a bare minimum. The animals take care of themselves by harvesting their own food and by spreading their manure for immediate recycling. This organic matter is transformed into humus by the microorganisms of the soil and ends up as nutrients for new grass growth. In addition to providing the foundation for the production of top-quality food for our livestock, our living soils covered with permanent vegetation acts as a sponge and filter, helping to improve the quality of the water flowing through our precious Jacques-Cartier watershed.

Anyone that knows us, knows that we sincerey care about what we eat. Our animals are raised without hormones and with a purely natural pasture grass diet. The growth is slower but the effects on their health and ours is only positive.

Always in the field

Our calves are kept on pasture at all times. Our rotational grazing system conserves soils, optimizes plant growth and offers quality grass to animals. To do this, the herd is moved an average of three times a day, depending on the growth of the plants. A source of mineral salts complete the diet.

Raised in an environment to minimize stress results in animals in better health and a meat that is more tender.

Beef cattle are ruminants. The natural feed of ruminants is grass. Respecting this natural reality, our animals enjoy an almost exclusively pasture grass diet throughout their existence on our farm.

Grazing animals, fed on natural pasture grass, without hormones nor growth factors. A local farm that, like you, cares about the environment. A lean, healthy meat, that we savor in all conscience. This is what we believe in. That’s what we offer you.

The meat carcasses are transported by refrigerated truck to a butcher in our local Portneuf County. The butcher will then cut them according to the preferences of the customers. Thus, the butcher and the customer have a good discussion over the phone to determine the desired styles of cuts for each part of the animal. Don’t worry, the butcher is an expert and will guide you through the process!

Our conservation method allows for fast thawing at the moment of use (30 minutes in cold water), reduces packaging waste and eliminates water dripping during the thawing process.

I have more questions (FAQ)

The animals are slaughtered before reaching adulthood. Although they are bovine, it is not exactly like beef that we find at the grocery store. But it is also not about veal meat, which are slaughtered very young. In fact, the exact term is "baby beef" which is the intermediary between the two.

Natural grazing ... why not organic?

Although we believe deeply in the principles and values of organic, we are not certified as such and therefore cannot display our beef as such. The main reason is that calves should be born on our farm. For the moment, our farm does not have the infrastructure required to winter the animals in a comfortable way, so the calves are bought in the spring from Quebec breeders.

What about the sanitary standards?

Our animals are slaughtered in a provincially inspected slaughterhouse. Inspectors and veterinarians are present on-site to ensure that the operation is performed without cruelty and in an infrastructure that meets the highest sanitary standards.

Can I order less than a half-animal?

Yes! It is now possible to order 1/4 of baby beef. The meat you will receive will come from the front and the back of the animal. The cost is 6,25$ / lb, carcass weight. A quarter baby beef will weigh about 125 lbs carcass and will give you about 1,25 pound of boneless meat a week. A space of about 5 cubic feet is needed in your freezer.

It’s all about eating green!

Hoping that you have as much pleasure to savor our meat that we have pleasure to raise it! 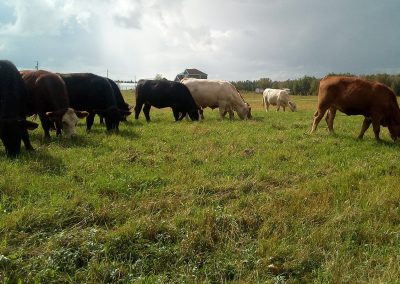 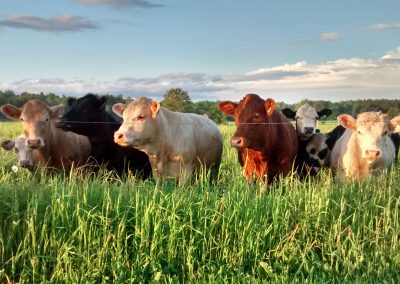 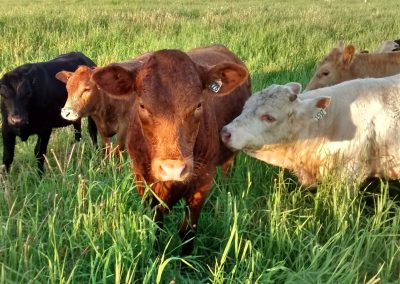 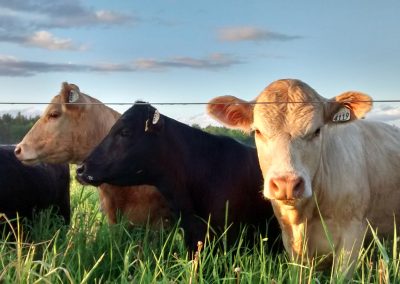 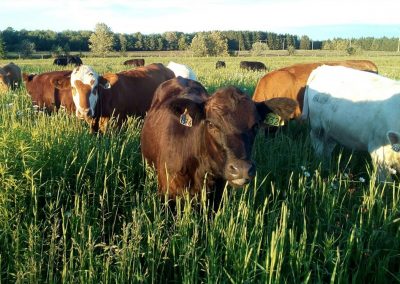 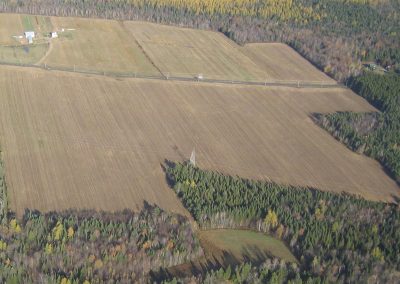 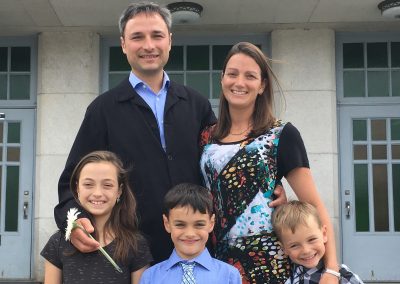 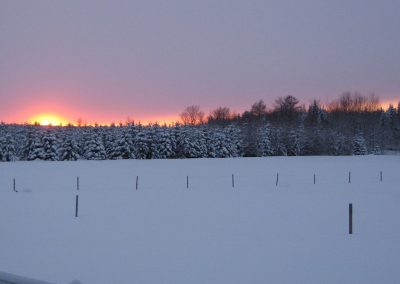 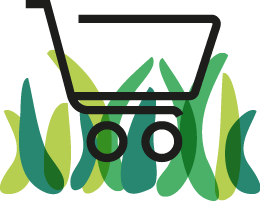 The price includes meat, slaughter, cutting, packing, freezing and delivery to a drop-off point near you. Absolutely no hidden cost!

Order now
I have other questions (FAQ) 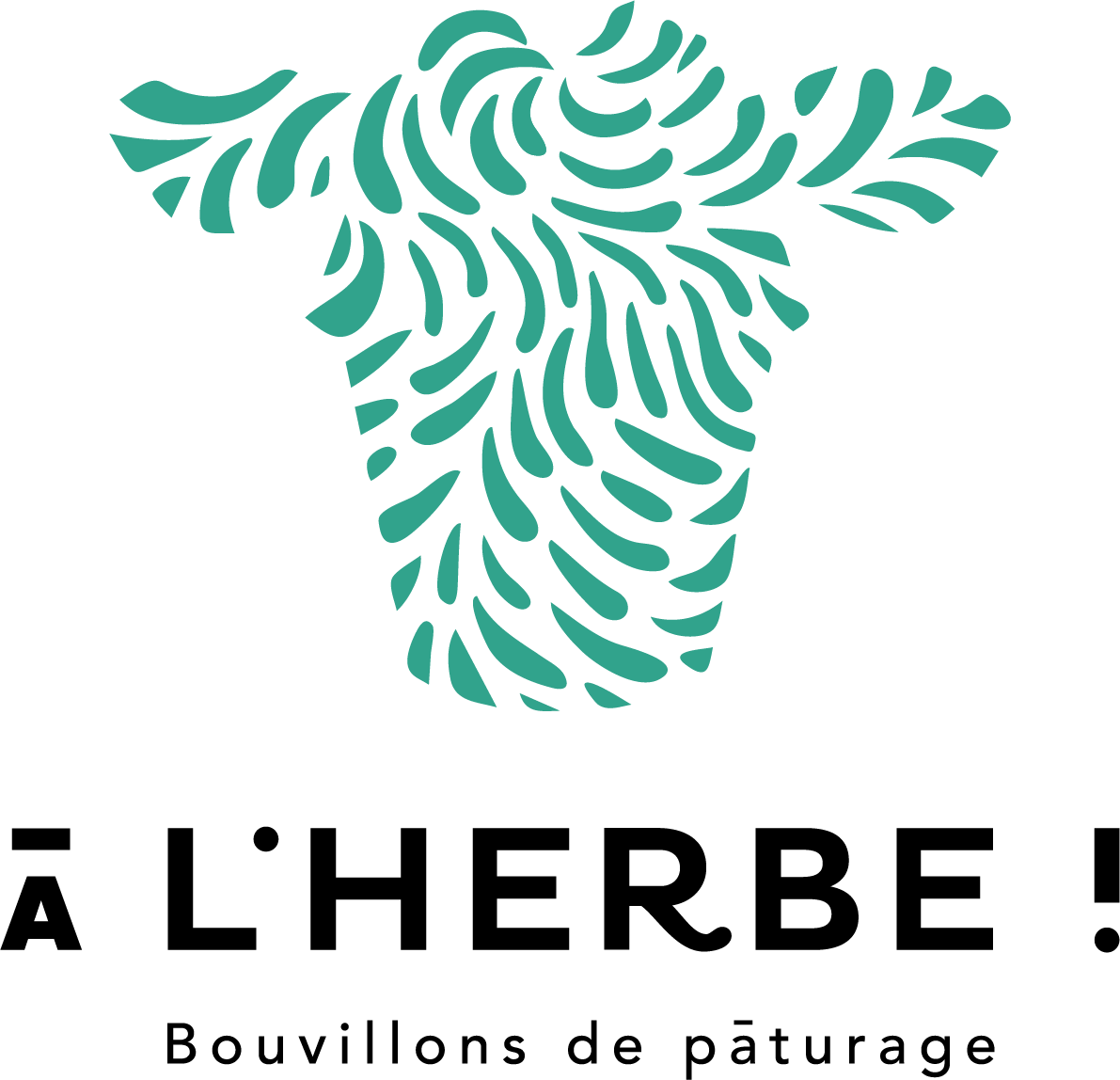